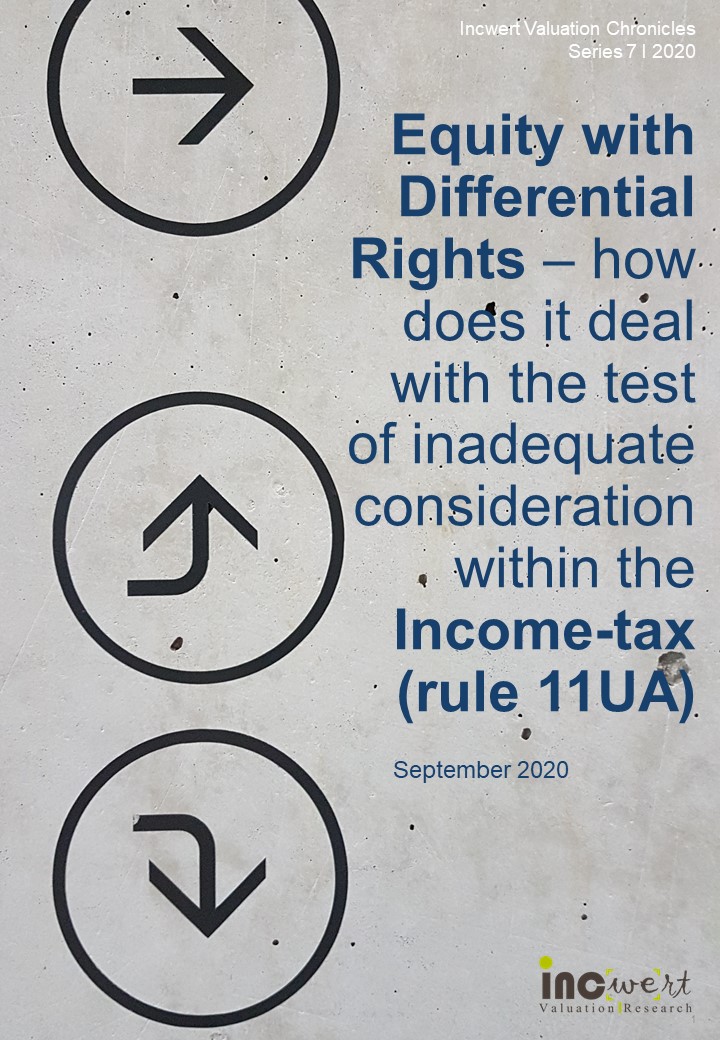 The finance bill, 2017 introduced two critical provisions which are meant to ensure that consideration offered in a transaction is not inadequate when compared to the fair value of the asset being transferred. Legislature in its prudence considered it appropriate to benchmark such consideration against the net book value as computed under Rule 11UA of the Income-tax rules which CBDT subsequently notified in July 2017; however, with the idea of differential rights as to dividends, voting or otherwise (hereafter referred to as ‘DVRs’) picking-up in India pursuant to the introduction of section 43(a)(ii) of the Companies Act, 2013, can DVRs be a stratagem to emaciate the income tax (Rule 11UA) valuation?

In this paper, we delve into this compelling question and seek to understand if the current rule is water-tight to address the grey areas of valuing the stocks with DVRs. We attempted to analyse situations where issuance of DVRs could have the possibility of undermining section 50CA and clause (x) in sub-section (2) of section 56 of the Income-tax Act. For example, a higher-priced class of equity share of a company being underplayed by being ascribed a lower value determined on a pro-rata basis under the extant rule.

DVR, a strategic and substantive control feature embedded in the equity, can it be capable of laying waste the deeming provision of the full value of consideration and that of the taxability of receipt of the sum of money or property without/inadequate consideration.

Globally, DVR structures are most commonly seen in founder-led companies where founders are considered to be critical for the success of the company, have a high amount of pre-IPO funding and are averse to any change of control1

In India, while many of the early-stage companies issue to investors shares which have exotic structures with varied features which include inter-alia conversion rights, higher participation rights, liquidation preference, redemptions rights/ puttable features and anti-dilution features, not many founders are able to negotiate differential voting/ dividend rights for themselves. So far, shares with DVR structure have therefore been less often seen in the Indian start-up environment; but the trend is gradually catching up with Investors lapping such rights.

Companies Act, 2013, allows a private limited company to issue equity shares with differential voting rights as part of its share capital. The differential rights attached to such equity shares may be with respect to dividend, voting or otherwise. A question may thus arise in the reader’s mind on how much expensive such inferior/ superior share be when compared to the ordinary share.

Allocation of the value of the enterprise, which is a function of economic and control rights, can vary significantly across the various class of shares. While the divergence in the pricing of the listed companies can be empirically assessed (in India, price divergence in DVR shares of listed companies has been between 3-45%), the task for determining the value of the different class of shares of a private company is challenging, if not impossible.

It is this challenge in segregating the value across various share class, which is potentially open to exploitation and tax avoidance. Presently Rule 11UA (1)(c)(b) or 11UA (1)(c)(c) does not explicitly provide an adjustment to address the value allocation across the various stock class. The rule states the following:

Hence, the equity value is distributed on a pro-rata basis across all the equity stock class, and there is a possibility that the value of a specific stock class thus determined is lower than the fair value adjusted for such differential voting rights.

Let’s understand this based on the following example: 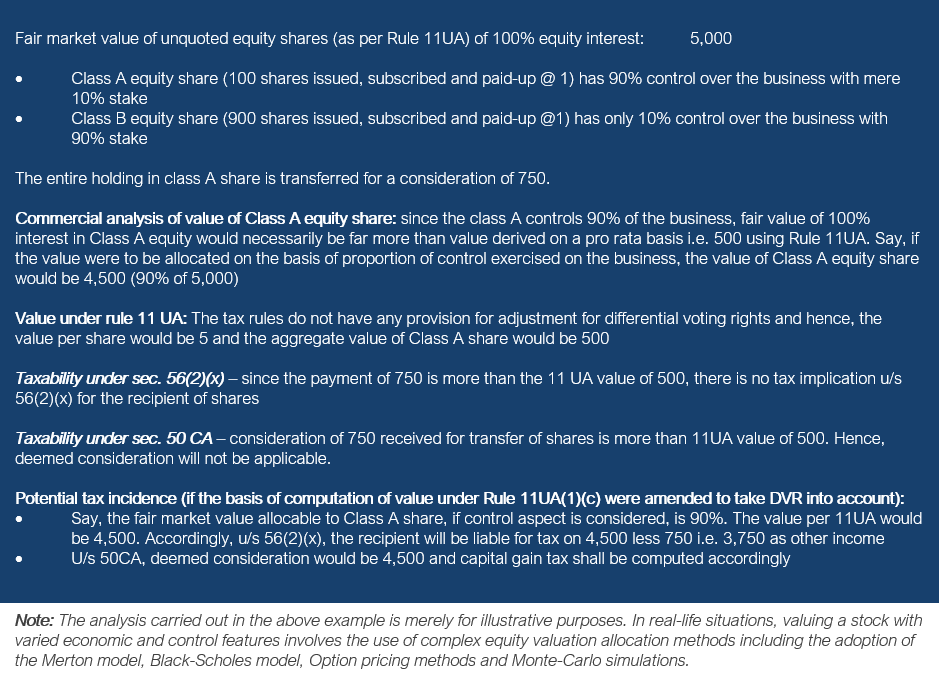 Similarly, there could be structures which offer significantly higher dividends to a specific class of equity share. While, by utilising a dividend discount model (assuming a simplistic scenario), it would be possible to determine the value of different classes, the extant rule 11UA may not uncover the veil on value allocation. The rule could thus be exposed to transactions which bypass test of inadequate consideration.

Furthermore, there are companies which offer a higher dividend to compensate for the loss of control to the shareholders. The net effect is that the allocation of value among share classes will widen the schism in the meaning of fair value under rule-based valuations and commercial transactions unless the tax rules are updated to reflect the changing investment landscape.

While the gap in the methodology may work to the advantage of some share class, a reverse situation could be where a share class controls only 10% but represents 90% of the paid-up value, which can lead to a distraught scenario for the shareholder holding this class of share.

Rule 11UA utilises cost approach as part of the building blocks of the rule-based method. What this means is that in the ordinary course of valuing enterprises under a going concern presumption, the shareholder is unlikely to find this rule a stumbling block. The value derived based on cost approaches typically fall in the lowest strata of the value pyramid compared to the market and income approaches. The Legislature in its prudence possibly thought of subverting the inadequate consideration transactions by testing the transaction value against the book net asset value. However, what is perhaps missed out was addressing the change in corporate law which had an allowance for flexible capital structure.

Does the gap in the rule have a material impact on the transactions in the start-ups in India?

Speaking of start-ups, where shares with different economic and control rights are frequently occasioned, the rule-based valuation in the extant state may continue to hold good. The reason we believe this is because, despite the issuance of varied classes of shares with different control and economic rights, balance sheets of start-ups are thin as the cash raised by the start-ups is typically expensed and the rate of capitalisation is low. Therefore, the secondary sale price tends to be higher than the value derived based on the cost approach and therefore the question about inadequate consideration is unlikely to be triggered.

Accordingly, we reckon the CBDT should look into the matter and possibly amend or come out with a consultation paper for fair valuing unquoted shares with DVRs and other substantive rights.

Disclaimer: This publication has been carefully prepared only for general information and education purpose and is not a research report or any kind of investment advice. Neither authors of this publication nor Incwert Advisory Private Limited have any kind of conflict of interest with any company/firm/entity which has been cited and have been used for the sole purpose of illustration.  It has been written in general terms and is not intended to address the circumstances of any particular individual or entity. Although we endeavour to provide accurate and timely information, there can be no guarantee that such information is accurate as of the date it is received or that it will continue to be accurate in the future. It should be seen as broad guidance only and does not constitute professional advice. You should not act upon the information contained in this publication without obtaining specific professional advice after a thorough examination of the particular situation. No representation or warranty (express or implied) is given as to the accuracy or completeness of the information contained in this proposal, and, to the extent permitted by law, Incwert Advisory Private Limited (“Incwert”), its members, employees and agents accept no liability, and disclaim all responsibility, for the consequences of you or anyone else acting, or refraining to act, in reliance on the information contained in this publication or for any decision based on it.